Genre: Romantic Suspense
Release Date: March 26, 2019
Blurb
Temptation is a sneaky bitch that brought two men in my life and I wanted
them both. One left without saying a word. The other asked me to be his and I
said yes. I moved on…so I thought.
Life isn’t a fairytale. Everyone has a secret. Everyone has a flaw. And
mine? Well, sometimes vows aren’t for everyone.
They say there’s two sides to every story, but the truth makes three. In
case you didn’t hear me the first time, let me repeat it.
Life isn’t a fucking fairytale.

The sex scenes were steamy and kinkier than expected, but sadly that was all this read offered for me. It was lacking in structure and any real character development (for example, Damien seemed to morph into Jaxon as the book went on). I also felt the relationship between Damien and Olivia was verging on abusive. Usually, this wouldn’t automatically make me criticise a book as I am a big fan of dark erotica and understand the difference between reality and fiction, but it came across as unintentional in this case, a method of creating a ‘strong and dominating’ hero that fell short:

“My hands flew to his, encouraging him to loosen his grip, but he was too far gone. When he gets this way at times, my only choice is to let him.”

I think the one sentence that summed this read up for me is the following:

“It was tailored as if it was made only for him, which I suppose is exactly what tailored is.” 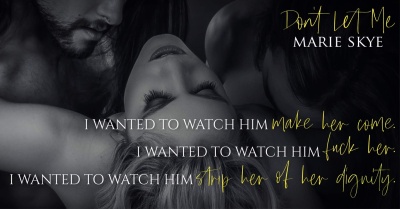 Marie Skye is your average career
driven woman by day, and a hidden lover of all things dirty by night. Or, as
she likes to say, professional by day; author whore by night.Army brat, and now just a brat. She currently resides in Austin, TX where there
really is a difference between breakfast burritos, and breakfast tacos, but she
really doesn’t know what the difference is.If it’s dark, and full of inappropriate material. She’s attracted to it. She prefers
making her character’s work for their happy ever after, if they get one, and
she has no problem making sure they endure every obstacle to try to get there.
She’s known as not having a filter, and if she’s asked for an opinion, be
prepared to get a response that’s most likely a mixture of sarcasm and
bluntness.

She also has a soft side, and volunteers her time to support Elephants, as well
as not attending any events that has elephants in their acts. She also loves
sloths, and cute kittens, and prides herself on being able to quote the entire
series of Friends.

Marie is the type of person that can be friends with anyone, but if you have
cake, you’re pretty much her best friend.