You probably won’t like my story. Heck, I’m not sure if I… oh, never mind. It’s 1155 A.D. and my sister Jules and I are trapped in medieval France. My name is Guillaume Lanval, and I’ve just lost the love of my life. I had to send Marie away, don’t you get it? I had to save her life. But now she’s gone, and I’m a wreck. I’ve made a terrible mistake.

Today is the day we travel to London for the coronation. We’re about to meet a man on the road who will change our lives forever. There are some evil things brewing around me, and it’s up to me to save the world again.

This is the story of how I saved the kingdom, got the girl, and fought alongside the greatest wizard the world has ever known. And you know what? This whole thing is definitely my fault.

***MERLIN IS BOOK FOUR OF THE CURSE OF LANVAL SERIES, A FANTASY AND SCIENCE FICTION TIME TRAVEL SAGA. OTHER BOOKS IN THE SERIES: MIRRORS, MARIE, AND MAGIC.***

Sacked in Seattle by Jami Davenport

Tyee University football player Riley Black has adored Tiff since high school, but she’s never felt the same way. As Riley enters his senior year of college, he’s finally moving on and enjoying the perks of being a star athlete. Until one glimpse of Tiff unearths all those old feelings of longing and desire, not to mention the trauma of their shared past.

Tiffani Vernon has been running from her demons for seven years. When she’s forced to return to Seattle for financial reasons and attend the same college as Riley, she’s confronted with the traumatic event which has shaped her future and scarred her memories of Riley. Tiff struggles to avoid her secret high school crush, but he’s not having any of it. He’s pursuing her with a relentless determination to prove once and for all, they were meant to be together.

Can love finally heal their wounds or will they succumb to the pain and forever wonder what could have been?

Nathan Hart is charismatic with a beautiful smile that makes women weak in the knees. A former bad boy with a mysterious past. He was made to be in Hollywood, on the cover of magazines and the star of movies.

He’s what dreams are made of … and tabloid gold.

But there’s more to him that he hasn’t told a soul. Even the gossip columns will never know.

Something that draws me to him unlike anyone has before.
Something that could ruin us both.
He whispers to play along; he promises it will all be alright.

I can’t tell him no, even if I wanted to.
The moment he locked his light blue eyes on me, I was ruined.
I never stood a chance. I only pray our pasts don’t rip us apart.

Heartthrob is just one of six scandalous romances from Best Selling Authors.
Read all about it in Exposé, the gossip column to sink your teeth into.
Each story in the Exposé Collection is a STANDALONE with an HEA.

In This Breeze by Kathleen Maree

A nerd. A quiet art student. A nobody.

Or perhaps, just some girl.

These are the non-spoken titles I was known as since I started at Lake Shore Uni almost two years ago now. When given the chance to leave my horrific childhood behind – I didn’t hesitate. In fact, I was ecstatic to have the door hit me on the ass on my way out of town; because the only two things I actually loved in my traumatic life…

Were coming with me.

And whilst the three of us shared the same beat-up truck when we moved here – that’s where the similarities unfortunately end.

Ethan ‘The Mule’ Jones, is kind of a super star on campus. Everywhere he goes he seems to draw attention. I guess that’s what happens when you’re headlining papers as the star basketballer for the LS Eagles. But to me, he’s just Eth. A boy who still spends his Friday nights snuggled up watching movies with me, and who walks me to classes just to make sure I get there okay. He is my best friend in every way, and I can’t imagine my life without him in it.

And then there’s Jase.

The truth is I knew from the moment I met Jase at the local skate park, when he was smoking a cigarette and teasing Eth for his poor skating ability, of how fiercely protective he was about those he cared for. From the time he blew his warm breath over my injured knee, to when he thankfully intervened on the most horrific day of my life. A day, that still haunts me when I am alone in the dark.

But Jase has his own demons too. Even if he doesn’t go looking for it, trouble always seems to find him. Which is why he has been absent from our lives for the past two years.

Sometimes I wonder what he’s doing.

Quite often I worry if he’s okay.

And I always, always, think about him.

Even though I shouldn’t. 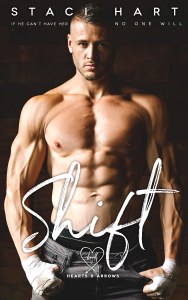 Even the gods cannot betray the will of the stars.

It’s been a hundred years since she’s warmed my bed, a hundred years spent waiting for her. Now we’ll compete again in a game that matters little to me. But my prize is far greater than a token to be paid for a favor — I want her.

And for the first time in a very long time, I have the chance to keep her.

Because now the ground has shifted, tilted in my favor, and with her footing unsteady, she will fall.

I will catch her.

Lilly’s life has been shattered by her ex. Few people know the truth about what happened that day. Lilly is trying to put the past behind her but everyone around her is moving on with their lives and it’s a constant reminder of what she’s lost. Lilly throws herself into university and her part time job as a distraction. What she doesn’t expect is for an unwanted promotion to once again send her world into a tailspin.

Will she be able to let her guard down, open her heart once again and fight for the happiness she deserves?

Lucas could never have imagined that his life would turn out like it has. Supportive parents, a powerful job and more money than he knows what to do with. On the surface he looks like the perfect businessman but Lucas is not only hiding his past but also who he really is. The only thing missing is something he swore he never wanted. When he finds a broken Lilly in his sanctuary will he be able to push his fears of love aside and be the man she needs?

Individually they have a lot of demons that have the potential to break them but will they be strong enough together to face them?

The Mercenary by Petra Landon

She’s a prisoner of the Imperial Forces. He’s a nomad with a private mercenary army. Can the unlikely alliance of a Budheya rebel and a Hadari’Kor Captain bring an Empire to its knees!

In a distant corner of the galaxy, Quadrant Five burns in the flames of a deadly war for territory and domination of space. The Budheya people are one of the worst affected. Once the most advanced civilization in Quadrant Five, they now struggle under the cruel yoke of Ketaari occupation.

Imprisoned by the Ketaari Imperial Forces for supporting the resistance on her world, a young Budheya girl is sent to a distant space station to complete the remainder of her prison term as a server girl in an alehouse. For a girl who has known only hardship in her short life, things could be worse. Until an old foe walks into the alehouse.

Zoran is Hadari’Kor – fiercely independent nomads who fight for hire. Their formidable reputation as well-honed and ruthless warriors makes others wary of tangling with them, even as other worlds are forced to choose sides in the bloody conflict consuming their slice of space. Drawn to a weary-eyed server girl, Zoran is forced to confront age-old traditions and question his role in the war consuming worlds and subjugating civilizations.

The Prisoner & The Mercenary

Alone, friendless and far from home, desperation forces Saakshi to make the riskiest gamble of her young life and take a chance on a formidable stranger with the power to protect her from the mighty Ketaari Empire. The fallout from this improbable pact reverberates across space. As passion ignites amidst the flames of war, Zoran fights with everything in his formidable arsenal to keep Saakshi safe from the long arm of the powerful Ketaari Empire. Will a mercenary’s quest alter the course of war and the balance of power in Quadrant Five!

Author’s Note: The Mercenary is a standalone story from the Space Opera series, The War Chronicles. Set in a distant corner of the galaxy, romance, swashbuckling adventure & action abound in this tale of one mercenary’s quest to gift his love a new life and the power to choose her own fate.

I rescued Sabrina from a mafia bloodbath when she was thirteen. Doing right by her became a priority for me, even while I was busy as the new head of the Philly syndicate. I sent her to the best boarding schools and kept her as far away from the life as possible. It worked perfectly. Until she turned 18. Until she came home. Until I realized that the timid girl was gone and in her place lived a smart mouth, a wicked imagination, and a body that demanded my attention. Who am I? I’m F*cked. Nice to meet you.