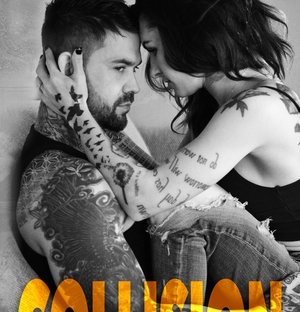 But when the killer that took Shane’s wife shows himself again on their doorstep it is a race against time.

Shane already lost his wife, will he be able to keep from losing everything again?

Macy is home at last but the ghosts of her past are never far behind. She has spent a lifetime hiding but she could never hide from Shane.

When ghosts of the past chase you how far can you run from the Collision?

“You can call me Hunter. I’m the man that took your wife Lisa and I’m also the man that will be taking things from you and your friends. I will be taking everything you care about and watching as your life and anyone else’s life you are involved in falls to the ground.”

I couldn’t help but grind my teeth. Hearing him threaten my friends and family ignited a fire in me and I couldn’t stop what came out next, “Listen here you piece of shit. I’m going to take great pride in bringing you down. I don’t care if its dead or alive, I will find you and I will end you. You will not touch another one of the people I care about.”

Hunter as he calls himself starts to laugh, “Oh but I already have Shane but maybe you should ask Macy where I am right now because I think it may interest you very much.”

I turned fast to look at Macy, she has her head down and was still typing furiously. She suddenly stopped, she looked like she had seen a ghost.

“He is outside Dawson’s house Shane!”

The voice on the phone began to laugh again, “You can’t be everywhere and you can’t be anywhere. See you soon Shane.” With that the call ended.

Macy was already on her phone relaying the information to Dawson, I could hear Dawson’s voice raise and that’s when I looked at the time, Sam would just be stepping out to walk Alyssa to preschool. The school was at the end of their block and Sam walked everyday to get there.

I quickly hit dial on Sam’s name from my contacts. It rang… “Come on Sam pick up” I could hear Macy behind me scrambling to get dressed, I took a cue from her and grabbed whatever was closest to me and threw it on.

“Hi Shane, what a…”  I heard Sam’s voice, I don’t let her finish her sentence, “Sam you need to get in doors now! You need to be off the street.”

I could hear her telling Alyssa to hurry up. Then I could hear it the sound of an engine revving to life. “Sam move, move now!”

I heard Alyssa scream and then the phone went dead.