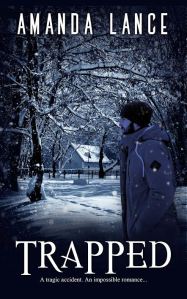 On the way to investigate a fugitive sighting, 21-year-old news intern Aubrey Kent is injured when an unexpected storm destroys the newscopter—along with the rest of the crew.

Now, stranded in the Canadian wilderness and on the brink of death, Aubrey is rescued by a handsome stranger whose cold disposition is as frightening as the remote cabin in which he lives. With no way to reach civilization before spring, Aubrey becomes Jack Gordon’s unwanted roommate. Her hope for rescue is much more desperate when she sees his hostile attitude and violent behavior.

Aubrey and Jack wait out the winter, they grow closer—their delicate friendship blooming into feelings neither of them could have anticipated. But the weather and the wolves aren’t the only dangers in the mountains. As Aubrey uncovers the reason for Jack’s self-imposed isolation, she realizes she’s closer to the story than she imagined—a story that might cost her life.

“Why are you being so forthcoming?” Jack’s eyes opened to find mine. Apparently, he hadn’t been sleeping, or even trying to. He did shift his position on the sofa and move to stretch out. I followed suit and uncurled my legs from myself before setting my feet on the coffee table.

“It was one of my promises,” he answered eventually. His voice was quiet, but there was a hint of something else there that I was struggling to pick up on. Was it shame or embarrassment?

“One of your promises?”

He sighed before baring his heart to me. “After those first three hours, when you wouldn’t wake up, I started making promises to you. One of them was that, if you woke up, I’d be honest and answer any damn question you asked me.”

I laughed but choked on it instantly, overwhelmed with emotion. “I’m surprised I didn’t spring right up.”

“What else did you promise?” My voice wavered somewhere between hope and fear, but I no longer cared.

“That I’d become a vegetarian. Give up meat forever and ever.”

I giggled hopelessly. “Even ham?”

His sigh was all annoyance, but his smile was anything but. “Especially ham.”

“Yeah,” he said sadly “But the idea of losing you made me desperate.”