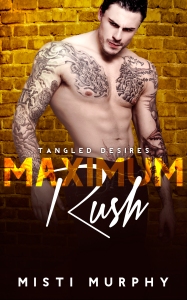 Rush Hadley wants two months of my time in exchange for the only interview the magic man’s ever done. It’s the opportunity of a lifetime. A make or break point in my journalism career. All I have to do is entertain the  famous magician.

A billionaire playboy who doesn’t understand the word no, he’s stubborn, one-track minded, and set on getting me into his bed. Men like him ruin girls like me with their dirty mouths and wicked tricks, but I’m not gullible enough to fall for his charms, even if his touch feels like magic.

Maxi O’Keeffe is a sexy little challenge I intend to have my way with. She might have said no, might keep saying no, but I always get what I want.

The quirky goody-two-shoes isn’t going to hold out forever.
Uncomfortably awkward and downright weird, she shouldn’t be the only person who gets me. She shouldn’t be more than a way to pass time in this boring old town. So why does she get me higher than any audience screaming my name?

This is, without a doubt, Misti Murphy’s best work yet. I’ve followed this series from the beginning, and although I’ve enjoyed the stories and these characters, and particularly the family interactions, I’ve always struggled with the internal voice of Murphy’s characters being too present. This is the first time Murphy’s writing has shown the maturity (and the humour) she is capable of.

I found both Rush and Maxi’s characterisation absolutely brilliant, but particularly the latter, with her quirks and fantasies, and her angst which actually felt real, rather than forced. She was one of the strongest written heroines I’ve come across in the romance world, and it’s fantastic to see so much attention being put on the female character as well as the male.

They were a couple I was absolutely rooting for. One thing Murphy is excellent at is writing strong sexual chemistry and anticipation for the characters, and this doesn’t disappoint.

This was a really fun ‘opposites attract’ love story to close off the Tangled Desires series, and the plot meant that we could read the happily ever afters of the previous characters and members of the Hadley family. It may not have been the strongest, most interesting series I’ve ever read, but I’ll miss it.