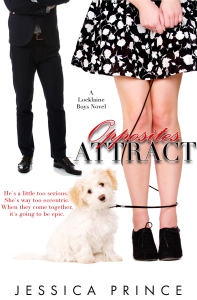 Delilah Northcutt has been described as weird, nerdy. But her favorite term is quirky. The eccentric flower shop owner definitely marches to the beat of her own drum. On the rebound from a cheating ex, she’s not looking to open her heart to someone else any time soon. On a whim, her best friend convinces her that one night with a stranger she’ll never see again is just what she needs to pull herself out of the funk she’s been living in.

Overly serious, workaholic Richard Locklaine was always described as the twin determined to do the right thing. Even if it was at the cost of his own well-being. But after years in a loveless, manipulative marriage, he’s finally free and ready to build a life of his choosing. And nowhere in that life is there room for another woman—unless it’s for just one night, of course.

They are complete opposites in every single way. But for some reason, fate has decided to force the two of them together. Despite the chemistry, they’re determined to fight the attraction growing between them. Besides, what could a florist with horrible taste in music and an attorney from Connecticut ever really have in common? Only one thing is certain. When they finally come together, it’s going to be epic.

My eyes narrowed as I studied her face. “I’m sorry, do we know each other?”

Why did she sound so pissed? I held my hands up in surrender. “It’s not a line, I swear. You just look familiar to me, but I can’t figure out where I know you from. It’s driving me crazy. We’ve met, right?” Her cheeks flushed a bright pink. With the wide eyes, thick bangs, and creamy pale skin, the blush just made her even cuter.

I gave her the grin that normally had women doing whatever I wanted them to and took a step closer to her. I was a shameless flirt, so sue me. “Was that a question or an answer?” I teased in a low voice.

She stepped back and nearly tripped over her own feet, which was something, considering she was in flats. Grabbing a long-stemmed flower from the table, she held on to it like it was some sort of shield. The top of the flower drooped as she fidgeted and spun the stem in her hand.

I cocked my head to the side. That couldn’t be right. I could have sworn I’d seen her before. “You sure about that?”

“Yep! Positive!” she replied overenthusiastically, twirling the poor, abused flower round and round as she pasted an overly bright smile on her face, making her look slightly psychotic. Something was off with this woman. “So what can I help you with?”

Shaking my head in an attempt to clear it, I remembered what brought me to Flora in the first place. “Oh, yeah, sorry. I’m here to pick up a sample bouquet for Navie Collins.”

The flower in her hand stopped spinning and the top of it fell over her fingers, the petals scattering to the floor. “Wait… you’re Locklaine?”

I grinned and held out my hand. “Richard Locklaine, but my friends call me Rich. And you’re Delilah…?” I trailed off, giving her the chance to add her last name. But she didn’t. And my hand stayed extended and empty as she stared at me, aghast, like I’d just informed her I planned on voting for Trump or something.

She seemed frozen for several seconds before she finally blinked and stalked away, walking over to a glass faced refrigerator on the back wall and jerking it open. “Here you go!” she all but shouted as she yanked something from inside and stomped back to me. “Here’s the bouquet.” She tossed it underhanded and I had to scramble to catch it. “Enjoy the flowers. Hope Ms. Collins likes them. Have a nice day!” Once she finished her rapid-fire sentences, she sucked in a deep breath, spun on her heels, and disappeared through another door that led to somewhere else in the shop. I stood there for several seconds, the cold flowers in my hand, and I tried to figure out what the hell just happened.

It wasn’t until I heard an odd sound that I managed to shake off my stupor. “Son of a bitch!” I shouted. When I looked down, the beady-eyed rat/dog bastard had just finished unloading its freakishly large bladder all over my shoes.