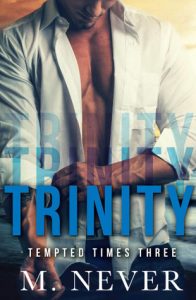 Two seductive strangers.
One scandalous night.
A trinity of temptation.

It was only supposed to be a single encounter. A night stripped of sexual inhibitions.

We were never supposed to become romantically involved.

But they were alluring and irresistible.

They were also the enemy.

Their company wants to take the one thing that means anything to me.

Now, I’m navigating a dicey path. Loving two men who can destroy me in a multitude of ways. They can shatter my heart, wreck my dreams, but worst of all, demolish the only place I’ve ever called home.

The sex scenes, the first in particular, were awesomely sexy, and Jenn’s character came across brilliantly. It was wonderful not to have an innocent protagonist but rather someone who owned her sexuality.

My only complaint? I wanted more! A longer book would have been great, with more development, more steam and more opportunity to establish Chase and Shane’s personalities, which I felt blurred a little into one despite being very different in the beginning.

Perhaps we will be blessed with a sequel. It feels like this story could indeed be explored further and that it’s not quite over yet.